Monkey Fingers Hike in the Dades Valley of Morocco 2023 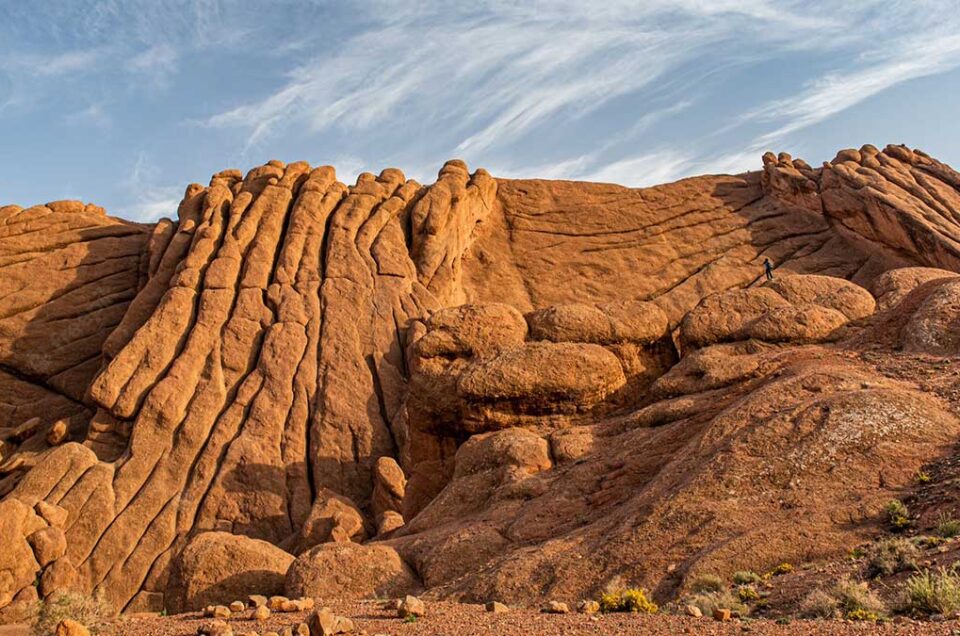 The spectacular rock structure formed by erosion looks like a primate’s fingers emerging from the Dades River, as the name indicates. The Monkey Fingers, also known as the Talmat Cliffs, is one of Morocco’s natural beauties that even Moroccans can’t have enough of.

Find out how you can trek into caverns in cliff faces or marvel at the unusual and surreal beauty of the famed “Monkey Fingers” for a promising hike in the Dades Valley. The Monkey Fingers refer to the weird, eroded sandstone rock formations resembling a terrestrial landscape.

Where to start your Monkey Fingers Hike in the Dades Valley

If you want to continue to the Todgha gorge, you can find it further along N10 (R703 from the town of Tinghir). You may use public transportation there, but the best way to experience it is to hire a four-wheel drive car, which gives you flexibility and independence in your excursions.

The Monkey Fingers are around nine kilometers from Boumalen, near Tamellalt City. The trip from Marrakech to the Sahara, which takes roughly five hours, is the shortest way to this geologic wonder. Travelers interested in culture can visit the Berber towns and homes, which are distinguished by their reddish tint. Surprisingly, most of the residences in the area blend in with the rock constructions of the Dades Valley.

Whether you are a leisure traveler or an adrenaline fanatic, the Dades Valley has fantastic experiences in store for you! The Dades oued, which has its source in the High Atlas, has carved some of Morocco’s most stunning gorges.

Hiking, rafting, and rock climbing are all on the itinerary! The valley’s center is a refuge of freshness and stunning vistas populated by very kind people. Discover the Dades Gorges in the spring, when the valley is teeming with abundant wildlife. Escape to a garden filled with almond, argan, palm, poplar, and walnut trees.

Take the road through the gorges that leads to At Moutad to view all of the valley’s splendors. Before reaching the Atlas Mountains, you’ll pass through stunning orchard scenery on the Dades. Tamlalt is roughly nine kilometers after Boumalen. The “monkey fingers” are peculiar rocky outcrops found here. This geologic wonder is especially beautiful around sunset.

Explore the remnants of an old Kasbah on the other side of the oued, a place steeped in mystery and sorrow. This is the start of a three-and-a-half-hour hike that will take you along the Dades until you approach the settlement of At Oudinar. If you’re not driving a 4WD vehicle, proceed with caution after the bridge.

Tamellalt is located in one of the most picturesque areas of the Dades River valley. Aside from the lovely oasis and ruins, there are several really nice evocative orange-red rock formations known as Monkey Fingers. A fan favorite for hiking lovers in which you can do so cardio as well as enjoy the picturesque scenes of Moroccan nature.

Monkey Fingers, a rock formation along the road at Tamalt, is among the less recognized but very spectacular sights. The high cliff face, known as the Cliffs of Tamlalt, seems pebbled and long vertical portions of rock contain “digits” created of a conglomerate of stones that rest in a unique configuration, unlike any other area of the valley. As the name suggests, it seems that a hand is emerging from the river below.

The cliffs are most likely comprised of sedimentary rocks like sandstone and limestone, but the method of erosion that created them is unknown. Depending on your experience level, you can hike the region with or without local guides. It makes a lovely photo stop and a pleasant area to hike since the Monkey Fingers are a popular tourist attraction in this Moroccan region. They go on for 170 kilometers (between Jbel Saghro and the Haut-Atlas massif). Extraordinarily, the area also contains oasis in the midst of its dry and desert setting.

Hiking alone entails a large amount of responsibility. Hikers without a guide should maintain a certain degree of decorum and resourcefulness; so, it is important to connect with the guesthouse owners in case of emergency. Moreover, make sure to see the Dades Gorge during the dry season as it is the most optimum time for the Hike in the Dades Valley. Finally, do your best to avoid taking pictures of natives or locals; they dislike that. Instead, try to concentrate on the breathtaking scenery of the oasis and rock formations.

All in all, the Dades Valley attracts those who choose to be less touristy yet also more daring. With magnificent green oases and welcoming people in the Berber communities, one night is not enough. Monkey Fingers Hike in the Dades Valley might be one of Morocco‘s most distinctive experiences if done correctly. For more information, do not hesitate to contact us.

Monkey Fingers Hike in the Dades Valley of Morocco 2023